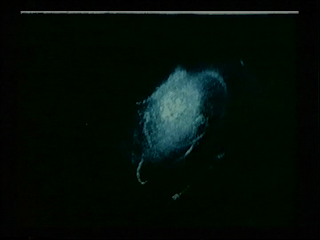 When I first saw on Fred Camper's Senses of Cinema top tens list a movie called Swiss Army Knife with Rats and Pigeons by a guy I had never heard of, I thought Fred must be kidding... He was just trying to be eccentric or something...

A few years later, Fred projected five or six films of Breer's to me in Chicago. My first reaction was 'IMPOSSIBLE!'. These films were not humanly probable... I remember being unarmed by 69, and then lost watching 77.

I don't remember where I saw What Goes Up?, it had to be in Chicago, maybe Onion City or maybe it was Fred who screened it for me? I know I saw it again somewhere...

After 2004, in New York, I was working at the Film-makers' Cooperative (co-founded by Breer in the 70's), where part of my job was inspecting films, frame by frame. I was happy, happy, whenever I had to inspect a film by Breer, sometimes taking my time to do it very slowly, inhaling genius.


One day, I was working at the Coop, alone in the office. The phone rang. The voice said:
- Hello, this is Bob Breer.
- Robert Breer! You are my favorite film-maker!
- You must be exaggerating, young man...
- Oh, I don't know how to say how much I love your films, how can I help you?
etc.

This was my first, and only contact with him. He is still one of my two favorite film-makers, along with Rossellini.
That same day, I started writing a letter to him, but it didn't feel strong enough, so I never sent it. Now, I feel extremely disappointed with myself for not having the courage to share it with him at the time. I'm pasting it below, without any corrections:

After talking to you on the phone today, I felt very bad since there was so much more that I could have and should have told you. It was such a great pleasure to talk to someone who is a real hero, someone who means much more to me than most other things in the world.

When I first saw “69”, the first film of yours I ever saw, my first reaction was: “IMPOSSIBLE, how can a human being have such sensitivity?”. After seeing many other films of yours, and having had the chance to look at many of them frame by frame at the Coop, I still believe that is completely true. Your films are beyond human consciousness.

In my website, I make comments about every filmmaker I like or love, but about you I only wrote the following: “Robert Breer might be my favorite filmmaker, I seriously lack the words to describe his work” THAT is very true, because your work, more than anybody else’s, are so cinematic, so much tied to the nature of cinema itself, that it is senseless to try to make sense of them in words, or any other different kind of expression. They are complete in what they are, they mean things that could only be meant in cinema, no other medium could translate it, and that is exactly why they mean so much. I cannot not admire the person behind those films...

I wish there was a way to express how much you have added to my life, how much you improved my sense of life and art, but there isn’t. I know it, I feel it, it’s THERE for those who would be able to see it and that’s all.

Unfortunately, I didn’t see any of your works other than film, but just reading about them was overwhelming enough. Can’t imagine what it would be like to experience them in reality.

Anyway, IF you ever need anyone to help you with making art, I would be more than happy to, I can’t imagine anything else more worthwhile to do with my time, and with my life. And if not, I hope you go on making, creating art, trust me they are expanding the consciousness of those who really can see what there is in them.

You might be one of the greatest people ever lived, and that is a fact you should keep in mind at any given second,

A few years later, I attended the Robert Breer Essential Cinema screening at Anthology in 2006. I wrote some things again but never posted anywhere. Again, it didn't feel strong enough. Here it is, edited and updated for this post:

'If I had to pick one filmmaker to send his/her films to outer space, it would be Robert Breer.

Anthology does an amazing job showing these films every year; That such a small number of people attend is a tragedy. I wish there was also a program of his later films, which are only better.

Breer's films reflect the thought-process as well as any other work of art, and simply by forcing us to concentrate on the tiniest, in terms of time and space, they push the boundaries of our imagination. But then, what happens in any tiny detail is overwhelmingly intense, the thought-flight is unlike anything there was before Breer, the scattered rhythms are so revolutionary that they change what we define as beautiful.

The surreality of Pat's Birthday, the solemn look on those faces while the most absurd things are happening, the animals at the end... It feels as if there is no rhythm in it, as if the person cutting them is beyond human consciousness, while also being perfectly personal.

What about the bar in 69 that enters in and out of the frame, revolving, a joke on the imagined three-dimensionality of the screen, acknowledging it, using it to make rhythms, while showing something so absurd I cannot help laughing silently?

It is said that for Breer the basic unit of cinema is frame. But that would be underappreciating his real achievement, because what happens between the frames is very crucial too, so in some way he denies any possibility of any concept of 'unit' in cinema, his films prove that the cinematic time is continuous if the filmmaker makes use of the moments between the frames.

One of his films is called Breathing. It does not show anyone really breathing, but that film and all of his other films are very close to the complicated rhythms of breathing, which can be taken as a metaphor for any other happening in the universe, which happens with no sense of symmetry or order.

Robert Breer also uses the sound better than anyone else, his seemingly moody sounds vary all the time and a small change in pitch or tone seriously changes the way the image or the rhythm is conceived. Scientists will have to work for centuries to understand how the images and sounds are interrelated in our minds, but they will never be able to create experiences that make us aware of our weird nervous system that we think and feel with. Being intensely aware is one of the points of Breer's art.'

Since 2006, I've been in Istanbul, where I never had a chance to see a Breer film ON FILM, but I have a number of his films on good quality video.

Recently, on a trip to U.K., I stopped by in Newcastle to see the Breer exhibit at the Baltic, my first experience of his floats, and his paintings... It was a joy, an inspiration so great I didn't even know what to do with it... There were two films being projected on film at the exhibit: Fuji and REcreation. Saw both more than 5-6 times during the same day, never tired of discovering...

I wrote very little about Breer, because I have very little to say... His art speaks too forcefully, moves me from a place that's too deep within. For a long time, only thing I could say was what I wrote for my own Senses of Cinema top tens list: 'If frame is the unit of cinema, what happens between frames deserves higher attention.' I elaborated on this here.

Although I try to imitate Breer's rhythms in all of my videos, I made one that I believe somehow resembles Breer's films, it's titled moonalphabet, but honestly I don't think it's good enough to even deserve to be dedicated to Breer... Oh also, there's an unfinished animation I attempted, completely inspired by Breer.

The image above is from Breer's 69.

Paul Taberham said…
Many thanks for sharing your thoughts and feelings Yoel. I'm pleased you acknowledge him as a sound stylist as well - that seems to wind up being overlooked, but he negotiated 'the sound question' beautifully
Mon Aug 22, 03:36:00 AM

Yeah, his sound is also great in introducing weird rhythms, making the films even less musical (in the good sense) and harder to grasp...

I love the weird Penguin sequence in 'Time Flies', with sync electronic music, for example... So far from what one would define beautiful or original, but yet, intensely so...
Mon Aug 22, 07:51:00 PM