Here's the note Pip Chodorov wrote on Frameworks. The image is from Breer's Blazes. 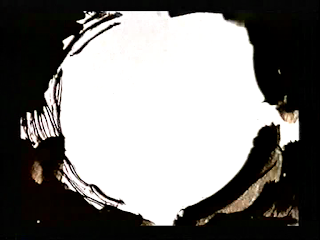 Very sad to relate that Bob Breer passed away yesterday.

He was a good friend, a very funny man, and a great artist.
He chose film, at a time when his painting career was taking off.
He lived in Paris for ten years and showed at Denise René's gallery - big abstract paintings.
Then he made a flipbook and got interested in abstract animation.
He felt that his abstract compositions were maybe just steps in a continual flow of motion from one to another.
In the 1950s, gallery artists didn't show films. (I guess that changed in 1966 when Warhol made Chelsea Girls).
His fellow painters became big: Oldenberg, Lichtenstein, Rauschenberg...
But Breer loved movement.
He made sculptures that move v-e-r-y s-l-o-w-l-y.
He made films that move very fast.
He was ahead of his time.
His films were not popular...
He was an inventor.
His father made cars (his father made the first streamlined car for Chrysler after having demonstrated, in the Wright brothers' wind tunnel, that their cars were designed to go faster backwards than forwards!)
And his father also made home movies - in 3D - with a Bolex.
Breer moved back to America and made experimental films that pushed film art into new directions.
He was one of the founding filmmakers of the New York Filmmakers' Cooperative.
He also made big sculptures that would creep around the art space, for example at Expo '70 in Osaka.
He taught at Cooper Union for many years and sensitized a new generation of artists to experimental film.
Over the last 15 years, many museum shows combined his paintings, moving sculptures ("floats"), and films. He felt that finally he could have a career as an artist and as a filmmaker.

We will miss Bob Breer.