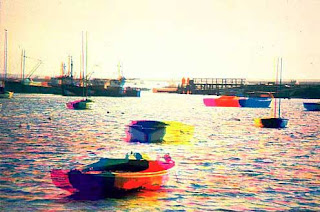 Chris Welsby is one of the underrated artists of cinema. His approach is revolutionary: he lets the rhythm of the film be truly shaped by the rhythms in nature. The following is Welsby's own description of his great film Tree; all of his films approach cinema in a similar way:

'The camera was placed on the flexible branch of a tree in a strong wind. The composition included both stationary and moving trees (a wooded landscape). The relationship of this landscape to the vertical and horizontal plane was maintained as much as possible. The camera ran continuously until all the film was exposed. The world is seen from the point of view of a tree as its branches sway to the rhythm of the wind.'


The following are excerpts from Fred Camper's article on Chris Welsby: Blowin' in the Wind.

'Chris Welsby's approach is less physical: he makes landscape films whose framing, camera angles, or edits are triggered by the sun, wind, or tides. The resulting images and rhythms are often quite beautiful but never smooth or predictable, lacking the predigested quality found not only in Hollywood movies but in many poetic films. These are not about getting sucked into a story or being captivated by artist-made abstractions. Instead his films not only contemplate nature — watching the clouds or the tides — but reflect on cinematic mechanisms as a metaphor for industrial civilization. Can our machine-made world enhance our experience of nature? Or are we irretrievably alienated from it by our own creations?'

'Later he saw "the task of sailing from A to B, which you can only do by working with the winds and tides, as a metaphor for a film."'

'For Tree (1974), Welsby tied his camera to a tree branch during a strong wind; he'd planned an 11-minute film, but the camera malfunctioned and the usable portion was 4 minutes. The wobbles of the frame as the branch moves dominate the movements of grass and branches within the frame: the viewer becomes profoundly aware of how much the act of framing conveys dominance and control — though here the agent is the wind.

In the 20-minute Seven Days (1974) Welsby finds his mature voice, offering a tour de force unlike anything cinema had yet seen. He took one frame of a Welsh landscape every ten seconds for a week, with the camera anchored to the same spot — though it did swivel. Placed on an equatorial mount (used in astronomy for photos of stars), it followed the sun across the sky. Moreover the camera flipped back and forth between two positions governed by the sun's visibility: when it was out, the camera turned 180 degrees from the sun (and the frame includes the camera's shadow moving across the land), and when the sun was behind clouds, it pointed straight at the sun.

What might sound like a gentle observational film seems to me quite violent. The wind roars on the sound track; clouds streak by almost apocalyptically; the camera flips back and forth for no obvious reason. On close observation, though, one can usually anticipate these changes by noticing a hint of sun behind the clouds or the land darkening: it's possible to see the natural "cause" of each cut in the preceding shot. This is a film that rejects the long tradition of landscape painting (and much subsequent landscape filmmaking) in which images serve as metaphors for the artist's emotions. Instead viewers are invited to bring their own responses to this enjambment of nature and the machine.

The camera's movement in Seven Days reveals a tiny stream, a group of flowers, some distant ridges. This is not a landscaped garden but a random assemblage of natural objects with an unordered beauty, a beauty the viewer must discover. (Welsby counts John Cage as another influence.) The film's rough edges and jittery, speeded-up rhythms seem calculated to express both the protean side of nature (the changing weather is apparent not only in clouds but in raindrops on the Plexiglas Welsby placed in front of the lens to protect it) and the violent, mechanical motion of the mechanized tripod. Just as sailing involves learning to work with the tides and the wind, the mechanisms of filmmaking can be brought into sync with nature's forces. Ethics and aesthetics come together here, as Welsby suggests that filmmakers let the clouds do a little editing.'