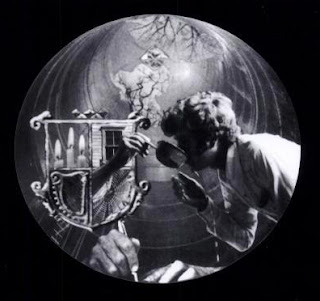 At the University of Pennsylvania's PennSound website, you can find audio recordings of some incredible poets such as Robert Creeley, Hilda Doolittle, Robert Duncan, Charles Olson, Ezra Pound, Gertrude Stein, William Carlos Williams and Louis Zukofsky, among many others.
I've been reading a lot of Robert Duncan (one of my five favorite poets/writers along with Shakespeare, Dante, Balzac and Joyce) and Ezra Pound recently, so it was with huge excitement that I found there an ecstatic Robert Duncan lecture on Ezra Pound. There's also a mind-opening essay by Duncan titled The Lasting Contribution of Ezra Pound in A Selected Prose, a book which includes some of Robert Duncan's essays, edited by the wonderful Robert J. Bertholf. For a long time I have considered Duncan's essays the best art criticism I've ever read anywhere. You can find my failed attempts at a similar approach to art if you travel around this blog.
The link to the audio files of Duncan's Pound lectures is here. (Unfortunately, the recording is cut just before the end of the lecture, so we don't have the full thing, but it's close...)
Here is a part of the lecture where Duncan criticizes Pound's ideas about poetry (after he strongly criticizes Pound's horrible antisemitism):
"Like I still feel very forcefully... I did not believe... Not only did I not believe in totalitarianism but I just did not believe in, at all, in order, in systematic order... I believed entirely in volition and believed in volition from a vast mass of people, factors. I wanna compose my poems... My words are inhabitants of a poem that comes up like a democracy and it throws me as I work with it because I gotta work with what the word means not what I'm gonna put into it... If I... Somebody... Some people in other schools of poetry they have an idea of an error you could make or something you could correct and my remarks about not correcting a poem have often just been totally misunderstood because they have a different basis for working. My... I substituted for any possibility of correcting, being totally responsible for what would happen in the poem. So if there... If something happened that would be an error... That is if I'm going along and I see the pattern and something happens that's not the pattern, this, working with this toward a larger pattern, this means my imagination has to make another leap to incorporate what another person would have made an error and would have changed so it would fit it in. And this is so acute that when I read poems that, you know, that are preplanned and they have squeezed in so that they carry out a theme that's up here, I turn off. I think 'My God!' I mean, 'that, of course, you could have thought that before! Who needed a poem to know that that came after that?' Because the lead for me is working with the materials there. But this has something to do with my idea of how the universe works. I mean after all I'm moving into the world of physics where we now got particle events that don't rhyme. The real thing, the root form of... Poets of Pound's generation were breaking the iambic contaminer but they were breaking a form that was intelligible when man thought the universe was formed that way and none of us believed that, I think. I mean... Or we may believe that, I believe that too, but on top of that we also believe in an entirely different universe and principle of form. And when we are intense in poetry we tend to imitate what we most deeply believe is the creative form of the universe."

Needless to say, I believe that what Duncan says about poetry is important and true for all art.
In the same recording, you can listen to Duncan harmoniously reading some gorgeous Cantos by Ezra Pound. I can't suggest those strongly enough... Also at PennSound, there is an mp3 of William Carlos Williams speaking about Pound, in his own particular way. And Jacob Waltman recently posted a quote on Pound by Stan Brakhage.
The image above is from the cover of Robert Duncan's Ground Work: Before the War. It always reminds me of Larry Jordan's films.
Labels: Ezra Pound Poetry Robert Duncan