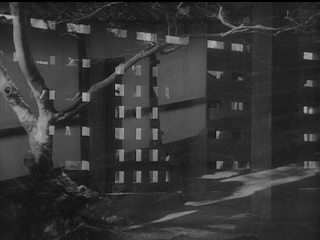 A perfect balance of cosmic distance & empathy that Mizoguchi achieves with such grace in his films... The camera is there, sometimes moving with the characters, sometimes reacting to the immense suffering told, but it always seems to 'speak' in a voice slightly more divine, widening our vision, changing what our 'truth' is. 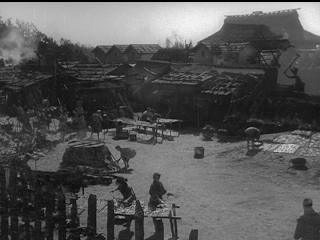 (SPOILERS in the following paragraph:)

Take the last moments of Sansho Dayu. The mother and son embrace, as a culmination of all suffering we have gone through with them... This is an open-ending: Life is torture, no doubt, but no place for nihilism, one should always worship the Goddess of Mercy. They sit on the ground, the camera is level with them, they fill almost the whole frame. The empathy is near total. Then when Zushio needs to break the terrible news to her mother, the camera pulls back and up, allowing some perspective, and maybe much needed breathing space. The purpose is not to pull our strings, but to make us feel anew. Then, Mizoguchi cuts to a wider shot, from above, with the mother & son at the lower-right. In the distance we see the sea, shimmering... The camera starts its movement to the left, leaving the two characters there as if they were no different than the rocks around. We're back to (perhaps with even greater force) Mizoguchi's cosmic perspective. In this sense, having a sense of cosmos does not mean looking down on human suffering, but seeing the interrelation between cosmos & suffering & love. In any case, we are moved away from individual human struggles. But as the movement to the left continues, we see a guy working, tirelessly. We don't know him, but we identify, feel empathy. He embodies life-as-struggle (or torture, if you will). But the camera keeps moving, does not stop to watch him, does not try to frame him specifically. He's placed with the rocks and the sea behind, we're reminded of cosmic scales again, or rather, cosmic is tied back to the personal again, and the film ends.

This sense of cosmic personal is what makes Sansho Dayu such a huge masterpiece. 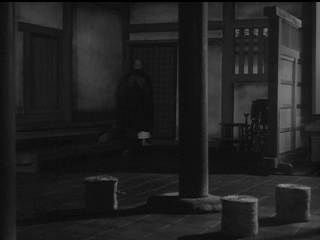 But then there's another thing that always amazes me in Mizoguchi: the architectures of oppression. In Sansho Dayu 'life is torture' but most of the suffering happens at the hands of other humans, within the structures built by other people. These structures, seen through Mizoguchi's camera-work, does express the power structures within the society, but they go farther than that: The structures are one of the ways the society imposes the power relations (the hierarchies) on the individuals. The buildings, or the inherent prejudices that built them, are NOT innocent. While telling his harmonious stories incredibly effectually, Mizoguchi also asks us to question the spaces imposed on us in our public life.

I had written about the film before in this blog, you can read that post here.
Labels: Kenji Mizoguchi