Yesterday, I went to see Bal (Honey) for the third time.

I went there because I felt like I needed the movie, because it was the only real thing around. Bal would offer me a ride to the very essence of things, while everything else seemed bland... I needed therapy, and it was with this mindset that I went in, not knowing what to expect, except to be healed... Healed I was when it was over. 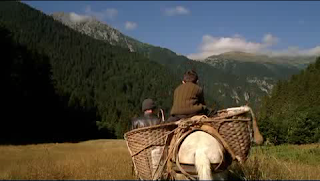 Now that I'm getting familiar with it, the road it offers feels less bumpy, like a free-flowing conversation. This familiarity does not ruin the experience at all, it breeds no contempt, no boredom. It's the other way around, Bal feels closer and closer to home, like a memorized prayer that gets more elating each time it is read (not that I'm a religious person in any way). Is it just coincidence or a case of selective attention that I ran into the following two quotes by Beckett today?
“All poetry, as discriminated from the various paradigms of prosody, is prayer.”
and
“...art has nothing to do with clarity, does not dabble in the clear and does not make clear.”
In his thoughtful article on Semih Kaplanoğlu's Yusuf Trilogy, Fatih Özgüven gives us some clues on how to approach these seemingly distant films. Here is my own summary of what he says, or rather, what I understand from it:
The trilogy consists of three films with peculiar titles: Yumurta (Egg), Süt (Milk), Bal (Honey). The following explanation for the titles only work in the context of the trilogy as the films create their own meanings:
Honey represents the Father, who acquires his knowledge of the world through work (the bees are working and Yusuf's father works in order to obtain honey and teaches his son how to). Milk represents the Mother who has a more innate knowledge of life, just as milk comes naturally. She is also the one insisting that Yusuf drinks milk. Egg is life, or birth, which can only happen through the coming together of what's innate and what's acquired.
This above paragraph can be taken as a mythology of how human beings are created, OR as a mythology of how artworks are created. To draw the parallel between art and life isn't very hard here, especially since Yusuf will become a poet. The distinction between life and art is superfluous anyway.
The expending symbolisms above work as clues to the trilogy, they clarify, but shouldn't be taken too far. Semih Kaplanoğlu's films also appreciate the thingness of things. So, in a way, an egg is an egg, milk is milk, honey is honey... Quoting D.H. Lawrence:
“Life and love are life and love, a bunch of violets is a bunch of violets, and to drag in the idea of a point is to ruin everything.”
When I first heard that a Turkish film-maker whose works I had not seen before was going to make a trilogy with the titles Egg, Milk and Honey, I thought it was ridicule, a poor attempt at something. Now with Bal, it all seems so very clearly, unshakably profound. In Bal, there is a scene in the classroom where a girl reads a paragraph from a textbook. It goes something like this (as much as I remember): “We eat food in order to obtain our energy. Without them we would be incapable of doing ordinary things such as walking, running, playing...”

So foods are not just foods, we exist thanks to them, they are our connections with other species, or the outer world in general. They are connections that become part of us. Notice that eggs, milk and honey are all foods obtained from animals (without actually killing them; animal meat is always gross in the films). As shown in the trilogy, human beings also use food for spiritual purposes in their rituals, as if they have metaphysical powers. 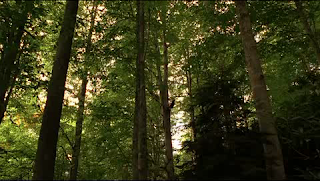 (SPOILERS in the following paragraph:)
Our senses are another connection we have with the outer world, and they are also metaphysical. Little Yusuf rings a little bell, supposedly hoping that it will somehow bring his father back. He shuts the light on and off in the evening, as if he's hoping his dad will appear all of a sudden (just like in his dreams). He also learns to taste honey, feels a need to embrace the trees... The first poem he ever hears is a Turkish translation of Arthur Rimbaud's Sensations:

“On the blue summer evenings, I shall go down the paths,
Getting pricked by the corn, crushing the short grass:
In a dream I shall feel its coolness on my feet.
I shall let the wind bathe my bare head.

I shall not speak, I shall think about nothing:
But endless love will mount in my soul;
And I shall travel far, very far, like a gipsy,
Through the countryside - as happy as if I were with a woman.”

For me, first and foremost, Semih Kaplanoğlu's Yusuf Trilogy is about the line between us and the outer world, or rather, about the fact that such a line actually does not exist.


I find it best to end with Semih Kaplanoğlu's own words about the Yusuf Trilogy, partly because it mentions layers I didn't even talk about here:

“Seeing at the Forum section of the 55th Berlinale, where my second film "Angel's Fall" had its world premiere in February 2005, how some directors look upon their own provincial towns opened new horizons for me.

Soon after my return home, I started writing about the Anatolian provinces; the short stories I wrote created a trilogy. The three, feature-length films will be titled Honey, Milk and Egg. I intend to begin the shooting with Egg, the third chronological story in the trilogy. The films will be shown in reverse order, i.e, as Egg, Honey and Milk.

What I'm looking at here is a longish cinematographic flash-back. Call it an internal journey, if you will, towards the authentic and away from the globalising face and appearance of the world's provinces. For it is in our provinces that the feeling of time, so eroded by civilisation, still clings.

This will also be something of an archaeological dig, extending from the last days of the mother-son relationship (with the death of the mother in Egg) to the beginning (the birth of the son in Honey). I hope in this way to narrate the burden and pain of passing time so that I may be able to invite everyone to remember and think about his own time. We all have mothers we love and it is highly possible that much is hidden in the time we spent with our mothers, and the time we are no longer able to spend with them.

I wish to note that my films are not only bound to the story, that is, the screenplay. I am of the view that time is the raw material of cinema. My expression is plain, spare in dialogue, shaped by visual and audio details and focused on conveying the sense of time passing with every breath.”
Labels: Arthur Rimbaud D.H. Lawrence Samuel Beckett Semih Kaplanoğlu

Anonymous said…
Yoel, I'm eager to see the new Kaplanoglu film, "Bal", since I like very much his three films I've watched so far ("Yumurta" in particular, which I prefer to "Süt" and an earlier, pre-Trilogy one. What you write is very promising.
Miguel Marías
Mon May 03, 02:17:00 AM

Yoel Meranda said…
which was the pre-trilogy one? the angel's fall, i'm assuming? i'm glad you like what you've seen...

yumurta was the first kaplanoğlu film i saw, i thought it was good but not amazing. but since then i've seen many films of his (and some of them many times) so i'm sure it's greater than i thought at the time. i'm planning to see it on DVD soon...

jaya said…
just finished watching yumurta. two days back watched bal and yet to watch (tomorrow perhaps) sut. bal took my breath away. little yusuf made me spend hours on end pondering the complicated child psychology and their angst. the relationship between the father-son duo is mesmerizing, and the depiction of it is nothing short of genius.
Tue Feb 21, 12:45:00 PM